A family by the name of Westcott Family, who reside near Rice University, learned of our Houston pool remodeling services and contacted us to see if we could help them with their existing swimming pool.

The Westcott’s reside in a Georgian style house that was built was in the early twentieth century and had been remodeled during the 1980s. While the historical appearance of the house was beautifully restored, the pool and pool patio that were built did not work with the architecture of the home.

The problem with the swimming pool design was that it aimed at creating a look that was contemporary to 1980s design styles. It was built in a radial design, meaning that it had curved sides, and a shallow end extending into the patio that was basically a semicircle of water extending out from the deeper part of the pool. While aesthetically attractive in its own right as a body of water, it simply did not work with the home.

One of the reasons that families like the Westcott’s work seek out Houston pool remodeling services is to have a swimming pool designed that compliments their home architecture and creates a unity between home and landscape. In the case of the Westcott’s, we determined very early on that the best compliment to their Southern style house would be pool with a more classical design.

By classical, we mean linearity, proportion, and clean right angles that form a perfect geometrical design.

In this Houston pool remodeling project, we were able to do this by squaring all four ends of the pool, creating a rectangular design in the process. We also reoriented the random water bubblers that had been scattered throughout the pool and lined them up in a straight line near the patio end of the pool. This reinforced the classical look by creating the semblance of fluid statues rising from the surface of the water.

We also added a touch of refinement by installing a new pool coping. This coping was made with thermal finished bluestone and made the pool stand out in the grass like an elegant work of pure symmetrical art.

Next, we removed the decorative concrete patio and installed a rectangular patio to compliment the home architecture. The interior of this patio was brick, while the border was also made of thermal finished bluestone to correspond with the pool coping. We also built a walkway out of thermal finished bluestone pads and gravel that led from one of the back doors of the house to the patio.

As with any Houston pool remodeling project, we then turned our attention to surrounding softscape elements. We added trees on the far side of the pool to balance with the wall of the house on the opposite side. We bordered the coping with boxwoods and mondo grass to add organic vitality to the scene.

Finally, to create a more private sensibility, we built a wooden wall adjacent to the neighboring brick wall to enclose the area in a decorative boundary that added organic softness to the scene and by nature acted as a sound buffer.

Houston pool remodeling projects result not only in a better swimming pool design, but also in a much better aesthetic for the landscape as a whole. 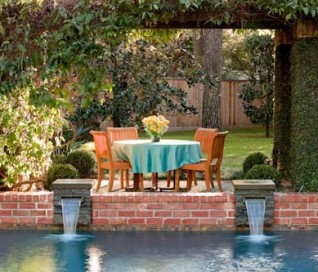 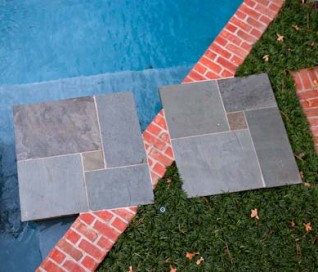 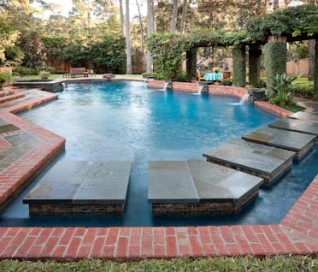 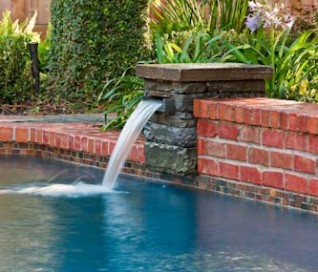 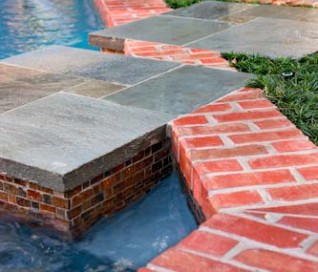 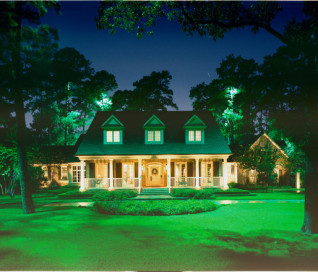 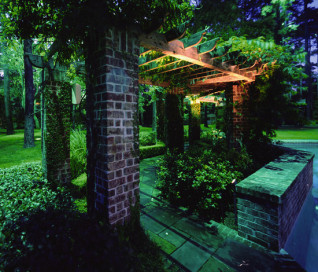