We were contacted by a Tanglewood resident who was unhappy with the appearance of her front yard. The existing drive was nothing more than a massive concrete slab that left little room for any vegetation other than small patches of San Augustine grass and a magnolia tree that was very close to cracking the back wall next to the house. The landscape had excellent drainage, which in most cases is a good thing. However, in this instance the topsoil retained very little rainwater, so for at least six months of the year the grass would wither and turn brown. Our client wanted this grass replaced with lush plantings of vegetation that would feature varying shades of green with seasonal flowers, and she also wanted a brick walkway that would add a classic Old World touch reminiscent of horse and carriage days of past centuries.

We began our project by carefully studying a number of late 19th-century photographs of brick roads and sidewalks. We studied bricklaying patterns used at the time to create streets that were made entirely of brick, but which by necessity also had to provide humans and horses with a smooth, sure surface for travel. We showed the owner one pattern in particular that caught our eye—a style known in bricklaying as the running bond. This pattern uses bricks laid only on their sides so that the narrow parts face upward. This creates a smooth surface to walk over, but the ends of the bricks do not line up with those in adjacent rows. When you glance quickly at a running bond brick walkway, your eyes often trick you into thinking the brick are racing against each other to a common destination—hence the use of the word “running” in the name of the pattern. This unconscious sense of movement is ideal for building a walkway that leads around a bend, or corner, or through a garden in the front yard.

A brick walkway of any kind is normally a period or historical piece, and it should always look as simple as possible so as to retain its original theme. In the case of this project, for example, we avoided any visible use of concrete or mortar when laying the bricks in the walkway. Instead, we laid a concrete foundation covered then by mortar, and we laid the bricks carefully, by hand, to make certain that we captured the essence of a late 19th-century street. We used only sand covered with paver seal to fill the space between the bricks. This created the illusion that the bricks were loosely laid together, yet walking over them, you felt a firm surface as sure as any modern concrete.

We wanted to really highlight the color and pattern of this new brick walkway to first time visitors and returning guests. In order to do so, we planted a line of boxwoods to frame it much like a picture frame is used to accent a fine painting. This is a common technique in formal landscaping, because boxwoods can be used to enclose everything from flower gardens and shrubbery to fountains and decorative sculptures. In this case, planting a row of boxwoods right next to the outer edge of the walkway formed a sharp right angle of intersecting green and red—just enough to catch the eye and force it to run along the bricks all the way to the front door of the home. Surrounding vegetation was planted to mirror this effect, and selective plantings of dwarf monkey grass were used at the base of our frame to hide the boxwood stalks and further accent the structure and pattern of the bricks.

All of this opened new doors for landscaping the remainder of the front yard and creating a new sense of balance and proportion on both sides of the house. The first things to go were the magnolia tree that was threatening the rear wall, and the patches of San Augustine grass that were drying in the sun. We planted drought resistant zoysia grass in the front center of the yard to create a very plush, emerald-green lawn that would require very little water, and that would retain its color throughout the year. Zoysia also has a much finer blade than San Augustine grass, and it is comfortable and safe to walk on either in shoes or on with bare feet.

To create a border for the south side of the property, we planted a line of Japanese yew trees that continue all the way to the wall in the back. This forced the eye to stay within the front yard and focus on the alternating layers of green and seasonal floral colors that were laid out in patterns in symmetrical, curved patterns of motion. We planted plum delight to add a splash of burgundy that would last throughout the year, and we introduced caladiums into to provide flowers in the winter months.

On the north end of the front yard, all that separated the residence from the neighboring property was what was left of the old driveway and a thin line of San Augustine grass. We left part of the pavement for parking, and we replaced the San Augustine grass with a linear planting of boxwoods and mondo grass. We then elevated this natural barrier with crepe myrtles placed to compliment the Japanese yews on the opposite side of the yard, and we planted a very large tree that we needed as a balancing point between the house and surrounding landscape elements.

Exterior worlds is located in the memorial area. They have been serving the Houston area including Tanglewood since 1987. Call Exterior Worlds at 713-827-2255 to discuss the creation of your formal landscape design. For more the 20 years Exterior Worlds has specialized in servicing many of Houston’s fine neighborhoods. 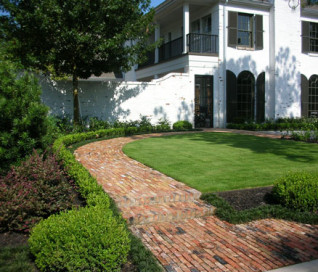