A Houston family hired Exterior Worlds as design consultants on a project that involved the installation of a new pool and the construction of an arbor, and outdoor kitchen, and a new landscape drainage and irrigation system. Each of these individual elements was built by contract professionals who came in on this project as partner companies. Each contributor invoiced their part of the project separately, but based on the homeowner’s request, closely followed the specifications and guidelines laid out in our master plan.

The first thing we went to work on was the original swimming pool. We immediately noticed it that it had been built at a much lower elevation than the surrounding landscape. The drop was so steep, as a matter of fact, that steps had been constructed leading down from the patio into the water. Apparently the original intent was to use the steps to add a sophisticated decorative aesthetic. In reality, all they did was to divide and waste a great deal of functional space that could have been used for other design purposes.

We therefore removed these steps and designed a new pool at the same elevation as the surrounding landscape. This opened up all four sides of the structure for more patio area, seating areas, and more decorations. To give the new pool a truly chic appearance, we built the coping out of limestone and lined the interior beneath the coping with glass tile. A travertine stone patio was then constructed around the pool and the spa using Groutless joints that fit together without mortar.

To add true luxury to the experience, we expanded a portion of one side of the pool into a large, heated spa. It was built in the shape of a square and featured a spillway, underwater lights, and controls that allow the homeowner to adjust water flow, temperature, and lighting levels at will.

Between the spa and one corner of the pool, we constructed an arbor using rough cut pine. We chose rough cut pine because it costs much less than cedar, and it lasts 3-5 times as long. We wanted this arbor to be one of the most comfortable and prominent seating and entertainment areas on the entire landscape, so we had it constructed it with a number of unique amenities and decorative features that made it more than just a place to sit and talk.

Speakers connected to an indoor audio system were carefully concealed within the arbors trellises and beams to make it seem like music was magically coming out of the wood from all directions at once. Special light fixtures and lighting controls were installed to allow the residents to adjust visibility and mood-altering effect. A custom stone floor was then constructed to complete our arbor design. It was built from irregular, rectangular stones laid over a slab and fitted together by jointed edges that required no mortar.

To expand the sense of comfortable living space beyond the immediate vicinity of the pool, we planted a row of Japanese yew trees behind the arbor and up lit these trees with special landscape lights. This created something of an emerald-colored backdrop that set off the warm tone of the furniture and added an extra layer of illumination to that of the pool and the arbor. 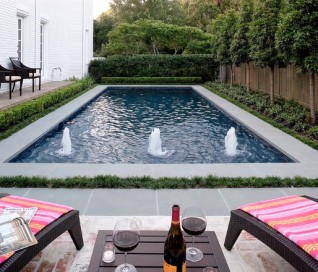 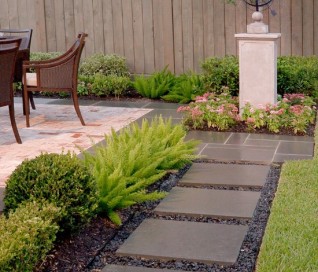 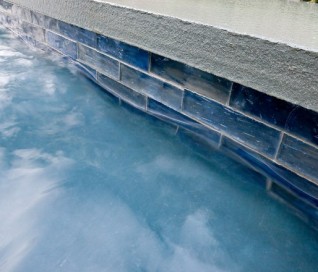 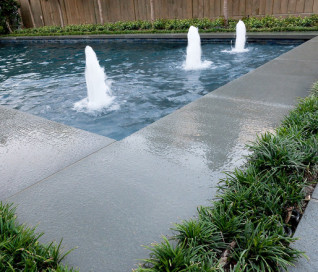