We were contacted by a family named Pesek who lived near Memorial Drive on the West side of Houston. They lived in a stately home built in the late 1950’s. Many years back, they had contracted a local pool company to install an old lagoon-style pool, which they had since grown tired of. When they initially called us, they wanted to know if we could build them an outdoor room at the far end of the swimming pool. We scheduled a free consultation at a time convenient to them, and we drove out to their residence to take a look at the property.

After a quick survey of the back yard, rear of the home, and the swimming pool, we determined that building an outdoor room as an addition to their existing landscaping design would not bring them the results they expected. The pool was visibly dated with an early “70’s” look, which not only clashed with the late 50’s style of home architecture, but guaranteed an even greater clash with any modern-style outdoor room we constructed. Luckily for the Peseks, we offered an even better landscaping plan than the one they had hoped for.

We proposed the construction of a new outdoor room and an entirely new swimming pool. Both of these new structures would be built around the classical geometry of proportional right angles. This would allow a very modern design to compliment an older home, because basic geometric patterns are universal in many architectural designs used throughout history. In this case, both the swimming pool and the outdoor rooms were designed as interrelated quadrilateral forms with proportional right angles that created the illusion of lengthened distance and a sense of Classical elegance. This proved a perfect complement to a house that had originally been built as a symbolic emblem of a simpler, more rugged and absolute era.

Though reminiscent of classical design and complimentary to the conservative design of the home, the interior of the outdoor room was ultra-modern in its array of comfort and convenience. The Peseks felt this would be a great place to hold birthday parties for their child. With this new outdoor room, the Peseks could take the party outside at any time of day or night, and at any time of year. We also built the structure to be fully functional as an outdoor kitchen as well as an outdoor entertainment area. There was a smoker, a refrigerator, an ice maker, and a water heater—all intended to eliminate any need to return to the house once the party began. Seating and entertainment systems were also added to provide state of the art fun for adults and children alike. We installed a flat-screen plasma TV, and we wired it for cable.

The swimming pool was built between the outdoor room and the rear entrance to the house. We got rid of the old lagoon-pool design which geometrically clashed with the right angles of the house and outdoor room. We then had a completely new pool built, in the shape of a rectangle, with a rather innovative coping design.

We showcased the pool with a coping that rose perpendicular to the ground out of the stone patio surface. This reinforced our blend of contemporary look with classical right angles. We saved the client an enormous amount of money on travertine by setting the coping so that it does not overhang with the tile. Because the ground between the house and the outdoor room gradually dropped in grade, we used the natural slope of the ground to create another perpendicular right angle at the end of the pool. Here, we installed a waterfall which spilled over into a heated spa. Although the spa was fed from within itself, it was built to look as though water was coming from within the pool.

The ultimate result of all of this is a new sense of visual “ebb and flow,” so to speak. When Mr. Pesek sits in his couch facing his house, the earth appears to rise up first into an illuminated pool which leads the way up the steps to his home. When he sits in his spa facing the other direction, the earth rises up like a doorway to his outdoor room, where he can comfortably relax in the water while he watches TV. For more the 20 years Exterior Worlds has specialized in servicing many of Houston’s fine neighborhoods. 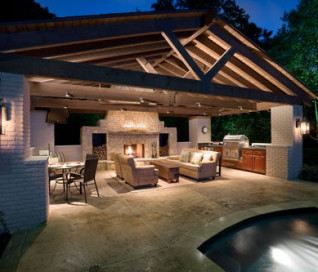 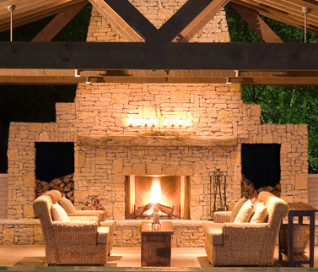 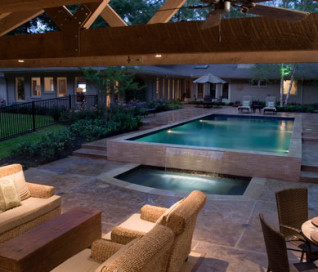 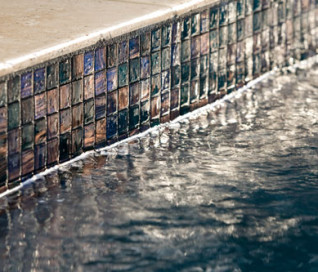 Pool and coping and glass tile 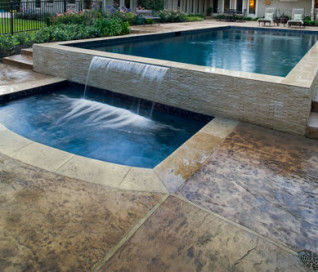 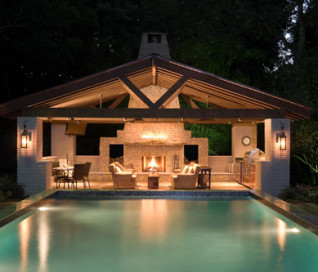