Six years ago, Exterior Worlds was contacted by a couple by the names of Rick and Susan Ashcroft. They asked if we could do something about the lagoon-style swimming pool that had been built behind their house in the late1940s. This style had been very popular at that time, and it is still a favored by some of the world’s more lavish resorts. However, ever since the day they had purchased their home, the Ashcroft’s had always been agitated by the ostentatiousness of the whole thing, and had finally decided to have it redesigned as a natural swimming pool. They wanted their back yard to retain the feeling of a tropical locale, but lose the touristic element in favor of that of a cozier, more private corner of paradise.

We agreed with their sentiments wholeheartedly. Just a cursory glance at the property confirmed that a natural swimming pool design was a much better fit for the grade of the landscape and the surrounding opportunities for vegetation and lighting. The Ashcroft residence was located on the side of a hill that sloped down toward a ravine, and the house itself house was built 40 feet back from the road. The steep grade of the land posed construction challenges to any type of water feature, but there was a way to build a natural swimming pool here that would achieve the aesthetic the Ashcroft’s were seeking and create a lasting element that required only limited and very intermittent periods of maintenance.

We began by stripping the pool down to its shell and building a retaining wall that offset the grade of the land. We shaped the surrounding earth around it into a much deeper basin that would allow water to collect naturally like it does at the base of a cliff. A series of interlocking pavers was laid around the perimeter to create a flat surface that extended from the back of the home to the retaining wall. This is a standard aesthetic used in most natural swimming pools, but it also served a special, practical purpose in this instance. Since this area was subject to heavy land erosion from runoff rainwater, pavers provided a very efficient way of reconstructing key elements of the structure every 5-10 years.

The natural swimming pool now appeared as an inviting portal into a remote hill country getaway, just a stone’s throw away from the back of the house. We made it easier to reach by building two series of stone steps that led down to either side of the water’s edge. We were careful to avoid making them look too much like stairs. Instead, we designed them to closely mimic the layers of rock that often jut from the sides of mountains and dormant volcanoes on islands all over the Pacific. To further develop this theme, we placed a large flat stone to serve as a diving area, and we created a waterfall on either side of it by laying down stones in a manner that created varying speeds of water.

Our construction methods here were very unique in comparison to those of our competitors. We took almost a month to consciously and deliberately lay each stone by hand. While this may seem painstakingly detailed to some, the rewards were astonishing, because our natural swimming pool mimicked Nature in such a way that it lacked almost all evidence of human engineering, and looked virtually identical to something you would stumble upon in the jungle of a tropical paradise.

If you are interested in any high-quality landscape services, Exterior Worlds has been providing the high-end residential landscape services and garden design services discussed above for the Houston and the surrounding areas including memorial villages (Piney Point Village, Bunker Hill Village, Hunter Creek Village), Tanglewood, River Oaks, West University and the greater Houston (Hou), area since 1987. 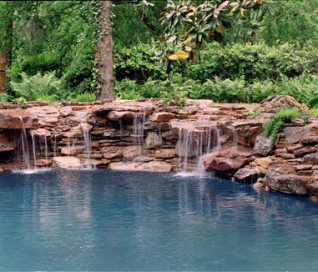 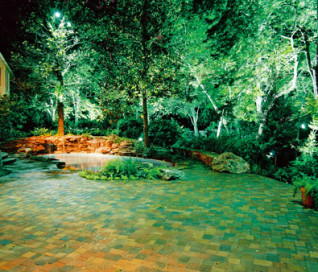 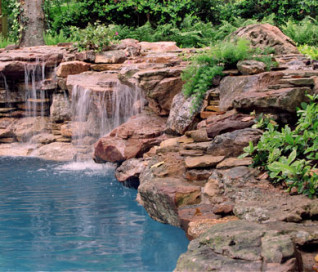 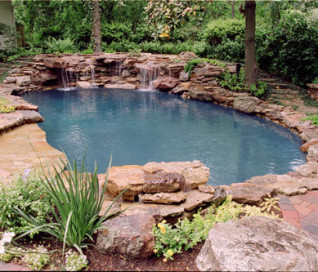