This particular project was unique in two respects. In terms of scale and scope, the property we were working on was exceptionally large. This allowed for the construction of an exceptionally realistic natural pool. Not only did this natural swimming area closely mimic wilderness equivalents, but it was further enhanced by a unique application of fiber optic stars that imitated stars reflecting off the surface of the water.

The pool was built in a curvilinear design that imitated the edges of natural bodies of water. In order to accentuate its realism, we built the coping around water’s edge completely out of rock. This rock perimeter was then aesthetically extended in a number of ways. Starting at the far end of the pool, we constructed a large rock outcropping that supported a natural waterfall that poured over a small grotto. This grotto was a special seating area for swimmers. When it is time to take a break from exercise, they can sit on the rocky ledge and look back through the waterfall for a spectacular view of the scenery.

The vertical impact created by the rocky outcropping, combined with the constant sound of pouring water, lend a sense of remote isolation to this natural pool. This feeling of being in a faraway place is then further accentuated with a spectacular display of star light that appears to dance on the surface of the water. These stars are actually an optical effect created by tiny fiber optic cables that are built into the basin of the structure. They carry light from a remote transmitter that is remotely powered, so there is no electricity or heat produced by their presence in the water. A controller causes various groups of lights to intermittently dim and brighten like twinkling stars in the night.

Once this feeling of remote isolation and privacy were firmly established, we then set ourselves to the task of making the natural pool as user friendly as possible. We did this by adding two key features. The first of these was a spa that contains ergonomic places for seating and headrests. In order to integrate this obviously luxurious element into what was intended to be a very pristine setting, we built the spa’s outer structure out of rocks with a similar color and proportion to those used in the construction of the coping and the waterfall.

Another element that was added for functional purposes was a beach entry located at the near end of the pool opposite from the waterfall. This area featured a blend of human amenities, creature comforts, and natural decorations to scale the sense of luxury down in order to better blend it with that natural aesthetic. Rock boulders, reflective of those used to build the waterfall outcropping, were positioned in various locations to emulate a rocky shoreline. We also installed three benches that reclined at an angle.

This allowed visitors who preferred not to swim to lay back and take in the panoramic view of the starlit natural pool, the waterfall in the distance, and the circle of stone that comprised the spa adjoined to the water at the midpoint. 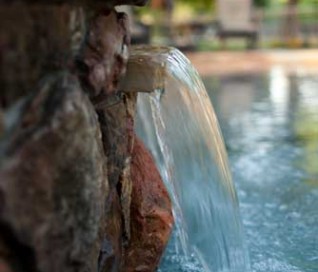 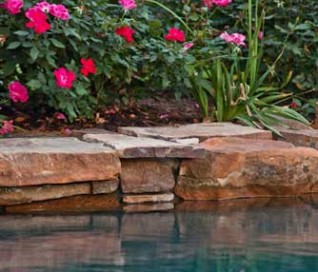 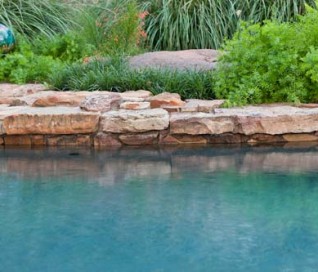 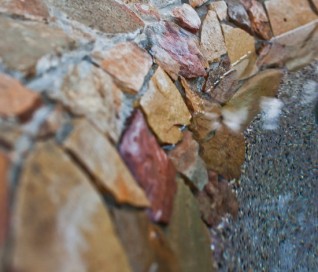 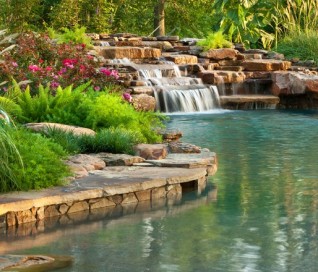