A well-known resident of River Oaks contacted us and asked us if we could harmoniously blend the organic and inorganic components of her landscape into a design that would complement the classical architecture of her house and exterior masonry. We immediately noticed that the symmetry of her three-story house, and the fine linear designs of the yard and surrounding stonework, were also two very key elements used in Italian gardening. We shared this insight with the homeowner, who agreed that such a design would work very well for what she had in mind.

We began by working on the walkway that ran from the sidewalk up to the front of the house. This walkway curved in from the sidewalk between two small stone walls and converged in a series of very small, ascending steps reminiscent of those in a staircase. This gave us an opportunity to establish an immediate sense of formal entryway by framing the front of the walkway with Agapanthus and a number of other perennial and flowering plant species that bloom in seasonal cycles throughout the spring and summer. We framed the flowering plants with boxwoods to create an organic enclosure whose angular symmetry and self-containment speak to essence of an Italian garden.

At the other end of the walkway, where the steps ascended to the porch, the walkway widened symmetrically and intersected on one side with the motor court. This proportional stonework was almost like the design of a planter, and provided us with an additional opportunity for planting a number of colorful plant species. We deliberately used annuals such as snapdragons in order to create an entirely new set of floral patterns that would change colors with the coming of each new spring. As we had done in the front, we then framed the flowers with boxwoods that were planted in rows and intersecting right angles. This served to frame the flowers with an organic enclosure consistent with the balance and angular symmetry of Italian garden design.

The thee-story house itself was a classical element in its own right. It rose up from the landscape to a height nearly equivalent to its width. Its architecture featured both Renaissance and Roman elements that gave it a very old, stately European sensibility. Its windows were shaped like tall arches, and its third floor was ornamented by a balcony that geometrically complimented the entirety of the structure and the roof above it. We added pots and planters to this area to create an outdoor garden on the patio, along with an irrigation system that would minimize the need for constant maintenance. Then, to draw the eye upward to the patio garden, we planted two Italian cypress trees, one on either side of the house, whose height added a sense of continued vertical movement upward. We kept the vegetation in the very front of the house to a minimum. This was done both to maintain the aesthetic of the windows, and also to allow people within the home to better see out of the windows.

To make certain that both vegetation and architectural highlights were clearly visible at night, we installed Façade lights and lit the Italian cypress trees with Mercury vapor lights. We also lit two very tall oak trees growing on either side of the walkway near the sidewalk. This maintained the sense of a grand entryway after sunset. We deliberately took a minimalist approach to lighting the front of the home, using illumination only to accent the Italian garden elements of the landscape, and letting the remainder of the light come through the windows from the interior of the home.

After we completed the front area, we turned our attention to the side of the house. This area was quite unique in that it was a yard that was completely covered by masonry. Its linear proportions and right angles framed the luxurious pool with an exquisitely formal sense of symmetry. The geometry was ideal to create a small Italian garden on the far side of the pool, and required only a few basic elements to add this organic aesthetic. We planted a row of Holly trees on the far side of the pool, and lit them with concealed fixtures. We mounted an Italian cherub in the center of the pool wall, lighting it with special sculpture lights, and balancing its presence as a center piece with handmade Italian pottery placed on either side of the pool wall.

This effectively turned what had been empty space on the far side of the pool into a mini-garden area that functioned as a decorative, living wall of green that enclosed the entire patio and provided complete seclusion and privacy to the homeowner and her guests. 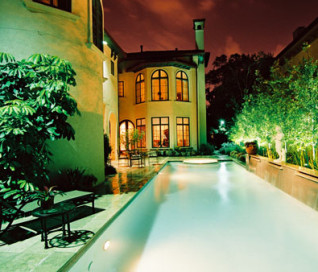 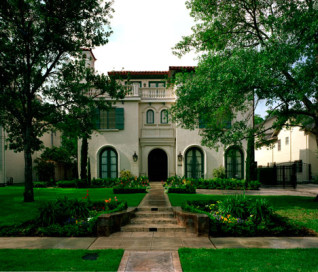