We were contacted by a family that had just moved into a home built in the 1960s. The house had that classic “space age” look that was popular in the years that America ran the Space Race with the Soviets. During this time, architects envisioned a future where technology would eventually create a better world, and where Nature would be more or less replaced with human innovation. As such, the contemporary landscape we developed for this home was rather unique in terms of the typical projects we develop. It consisted mainly of a concrete patio and a custom fountain, but it had virtually no vegetation incorporated into its design. This was due to the fact that the homeowners had specifically requested an inorganic look and feel to the landscape that compliment the right-angled geometry and predominantly glass construction of the home.

The home was actually built in two linear wings that came together in a sharp right angle, forming a natural courtyard of sorts in the lawn. Since grass was something the homeowners wanted to minimize, we converted this rectangular green space into a contemporary-style concrete patio. We decorated the patio by making diagonal saw cuts in its surface. This had the effect of extending the home’s sense of linear movement by creating intersecting patterns of right angles that mirrored the right angles formed by the house. Then, in the corner where the two wings converged, we removed a rectangular portion of the patio and laid down alternating white and black gravel in a checkerboard of squares.

We added just a touch of greenery that lent some–but not too much— of a sense of Nature to the patio and surrounding landscape. We planted a solitary palm tree in the graveled corner, and we placed a contemporary Frank Lloyd Wright planter near one of the far patio corners. Just beyond both wings of the home, we then built small, square planters out of stainless steel edging. We planted Mondo grass in some of these squares, and we filled the rest with moonstones to maintain the sense of minimalism characteristic of custom, contemporary landscapes.

We then implemented the second phase of the landscaping project, which consisted of the construction of a highly customized fountain design. The intention in constructing this element was two-fold. First the back of the home had windows so large they looked more like sheer walls of glass than typical windows. Adding a custom, contemporary fountain to the center of the patio would create a feature that would reflect off the glass during the day, and compliment interior lighting when illuminated at night. On a functional level, the fountain was also intended to provide a special recreational area for the children, who loved to play in the water, but who were too young to swim unsupervised in a pool.

We decided that the best way to accomplish both tasks was to custom-build a rectangular platform over the fountain jets that could easily support the weight of multiple children. This platform would have to be constructed with both a sturdy frame and a permeable surface that would allow water to penetrate it as it shot up into the air from the jets below. In order to fulfill both functional and safety requirements, we custom designed the fountain platform with two very unique materials. First, we built a frame with very stainless steel bars that would not rust. Then, we selected a very fine mesh made from shredded steel wire that was folded over and over onto itself until all sharp edges were gone. This made the steel feel more like a sea grass rug than a piece of metal when we were finished stretching it over the frame. The design worked beautifully, and allowed part of the water to shoot straight up in streams, but also produced a fine mist that added to the play element of the fountain. To light our custom fountain, we then suspended special luminaires just under its surface to enliven the streams of water and fine sprays of mist that shot up into the night.

While contemporary patios are relatively common in the world of landscaping, developing an entire landscaping plan around almost exclusively inorganic elements was something of a challenge. The key to our success in this project lay in careful analysis of home architectural elements, a correct interpretation of the spirit of the times in which it was built, and an incorporation of the two into a custom, contemporary fountain and patio design reflective of the optimism and modernism of the Space Age era. 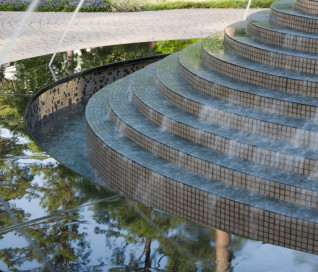 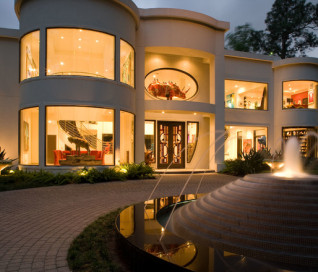 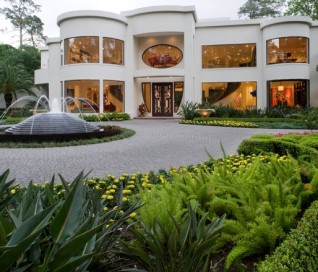 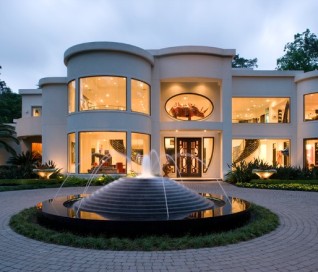 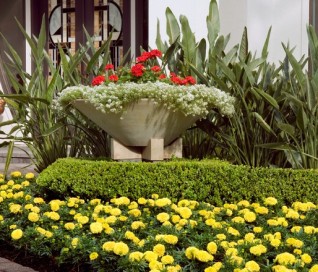 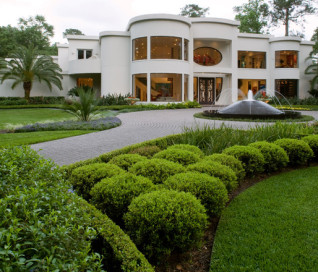 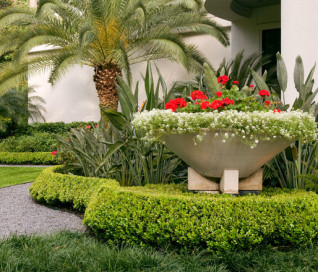 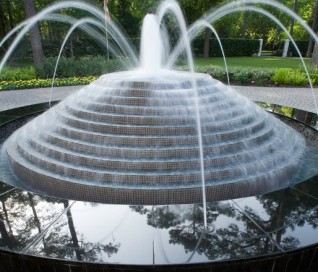